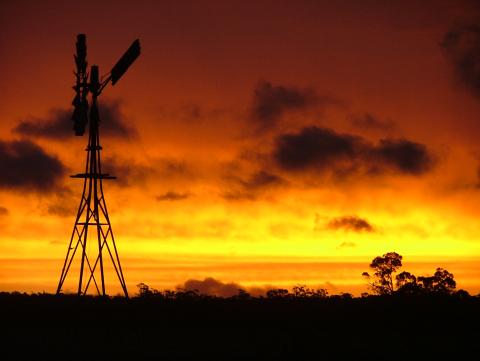 This is a simple story about what can be achieved when people and Organisations work together.  In this case the Sheep CRC.
As the Sheep Industry recognize how much more accurate ASBV’s become with the addition of Full Pedigree information, we will see a rapid uptake of this simple cost effective technology.
More accurate Breeding Values give the sheep breeder the ability to achieve faster genetic change in their flock.

In Oct 09 the Sheep CRC (James Rowe CEO) and the “New Inventers” negotiated Pedigree Matchmaker going on the TV show.
As individuals go on the New Inventers not Organisations two people heavily involved with the invention were chosen to go on the show. The appearance of Steve Semple  & Mark Mortimer on the ABC TV show was a great promotional success for Pedigree Matchmaker.

In promotion of Pedigree Matchmaker by Industry & Investment NSW following the show, a very misleading message was transmitted.

Both in “The Land”.
Firstly by a politicized Industry & Investment NSW (so called this week) promotion claiming the invention solely to one of their staff. (The State Government may have gutted the staff numbers of its former NSW Ag. and changed its name, but obviously not its self-promotion arm.)

Secondly a letter written to “The Land” by Prof. James Rowe (Chief Executive Officer, of the  Sheep CRC) to correct the false  impression the I&I NSW self-promotion had created.
This letter was so heavily edited by “The Land” it totally changed the meaning of James Rowe’s letter.
The letter made the point that both people who appeared on the “New Inventers” were significant contributors to the Pedigree Matchmaker invention, not just one of them.

After “The Land” had edited James’s correction letter, it inferred both individuals were claiming credit for the invention of the Sheep CRC. This could not be further from the truth in both cases.  One can only wonder why this editing was done by “The Land” !!!

On this matter we say ~ raspberries to the publicity machine of  I&I NSW and to the ”letter editor” of “The Land”.        All credit to the Sheep CRC & its collaborators.

One of the main strengths that bind the Centre Plus group together is total honesty between our members and those we work with. Therefore we like to see, credit where credit is due, and correction of misleading or untrue information, where Centre Plus is involved.

he CEO of the Sheep CRC Prof. James Rowe received an offer from a tag company that produces a rather large tag (similar to the Sydney to Surf tag) to trial their tag. James contacted Centre Plus as a collaborating flock with the Sheep CRC to think of a purpose for using a tag that has the ability for many tags to be read at the same time.
Mark Mortimer decided that a tag like this might allow the tracking of ewes and lambs as they walked through a gateway or opening and he would be very happy to do a trial to test the theory of capturing pedigree this way.  These tags were big and would have been difficult to attach to a sheep.
After planning the trial, the tag company involved withdrew the offer to trial their tags.

As the idea was so appealing we and the Sheep CRC decided we would continue with the trial forcing the ewes and lambs to walk single file through an opening which would enable the standard e-tags already in ewes to be used in the trial.
Centre Plus use a drift system to capture full pedigree on our elite animals where the lambs are carefully mothered up in the yards when six days old.  To run the trial we only needed to put the e-tags in the lambs at this time and once we had built a large enough group of ewes and lambs the trial could start.
As the Sheep CRC and NSW Ag had been working on walkover weighing technology Steve Semple and Bill Murray  (NSW Ag) were able to bring out and set up a short race with an Allflex hoop reader installed. Two batteries charged by a solar panel were used to power the hoop reader and TrueTest data collector that was used to collect the tag reads.

The trial started using lambs ranging in age from 6 to 14 days old and continued till nearly weaning age.  This was done to find, if by looking at the data in two-week intervals, whether the accuracy of pedigree got better or worse as the lambs got older.
Fortunately lamb age did not seem to influence the result. This allows the lambs to be given an e-tag at lamb marking time, virtually eliminating any extra labour and handling requirements.
Length of time data is recorded has the main influence on Pedigree accuracy. The accuracy improves daily for the first two weeks and then tapers off after that.

Once the data is captured (tens of thousands of reads) it has to be analyzed to extract the pedigree information.
As Mark was collecting data from the trial regularly he wrote a program to analyse the information.  The results of the analysis gave an excellent result when compared to the already known pedigree information..
At completion of the data collection we were able to send all the collected data along with the program Mark had written, to the NSW Ag / Sheep CRC people in Orange.

At this time we were able to tell them the trial had successfully achieved the results we had hoped for.  The Sheep CRC crew in Orange, Kevin Atkins, Jessica Richards, & Steve Semple, did their own analysis and came up with the same result as Mark’s analysis.
Steve Semple wrote a program to do the commercial data analysis for the sheep Industry.
The Sheep CRC / NSW Ag team at Orange named this Pedigree recording system and program Pedigree Matchmaker.

The Sheep CRC patented the Pedigree Matchmaker invention in the name of the Sheep CRC crew in Orange, and several other boffins.  There was no recognition of the Centre Plus involvement.  They claimed it was done to protect the Sheep Industry from big business grabbing the concept and making money out of it, to the exclusion of others.
In negotiations between the Sheep CRC and Centre Plus it was agreed that Centre Plus could use its own program to analyse members data but that all other data had to go through NSW Ag ( now I&I NSW) Advanced Breeding Services to be analyzed.  It was felt by both parties that the data needed to be properly analyzed to an Industry standard to prevent low accuracy pedigree data from entering Industry databases.
The following year several Research stations and a couple of studs began using the Pedigree Matchmaker system.  From that small start there has been a constant increase in the uptake of the technology.  Indeed it has been a great Sheep CRC success story.

Centre Plus does much of its own research but on two occasions now it has worked in collaboration with firstly the first Sheep CRC on implementing e-tags into a stud breeding program.  This project was highly successful creating a great improvement in the accuracy of data collection and massive reductions in labour / time taken to do many tasks. It also allowed us to collect much more data we could not justify collecting before.
More data (knowledge of the flock) equals more accurate breeding decisions.
Centre Plus freely passes on all knowledge from this research to anyone in the Industry.

Centre Plus is working in collaboration with the second Sheep CRC on implementing e-tags into commercial flock breeding programs to test the economics of the idea.
We are working on four main areas we see potential for greatest improvement in profitability.
1 Reducing the set up and e-tag costs. This has made the big companies very twitchy as they seem more intent on producing more and more fancy and expensive units to out do one another. In most cases there can be cheaper ways of doing things.
2 Plotting growth rates of feedlot wethers.  Finding which ones to finish and which ones to sell early etc.
3 Reducing the costs and time taken to collect maiden ewe data for creating EBV’s while increasing the accuracy at the same time.
4 Two members have done some Pedigree Matchmaker work on their commercial flocks. With the recognition that between twins & singles, there is a 6% difference in Greasy Fleece Weight, a 5% difference in Body Weight along with being .66 mic stronger, most measurement systems and indeed most classers would cull mostly twins. With Pedigree Matchmaker data the twin lambs can have EBV adjustments or classed separately.

Over the last few years constant drought has meant most Centre Plus members have had the battle of economic survival, highest on their priorities.
This has reduced the speed of our research projects. On the return of more normal seasons our research projects should again gain a high level of excitement.